This year Street Art Walking (and interested artists/designers) have the very exciting opportunity of recreating the Theatre Lane Project in Swansea, Wales, UK for the Troublemakers’ Festival held from Thursday 13 to Sunday 16 July.

A number of people within our Newcastle, Australia audience might remember the paste-up project held in Theatre Lane Newcastle which involved a global call out for posters to be made. The posters needed to feature The Victoria Theatre, which has been sitting closed for a number of years. The project resulted in many posters being printed in a variety of sizes and I would paste them up over a number of weeks which helped to create activity in what was a rather sad looking lane – see the photos below.

Whilst this project was still (barely) pasted up in March 2013, Dan Thompson of Revolutionary Arts and the Empty Shops Network was visiting Newcastle, Australia for the Renew Australia Creating Spaces Conference. To my absolute honour, this temporary street art project has resonated in Dan’s mind since. Fast forward to now and we will be re-creating the concept for a very special theatre in Swansea, Wales, UK.

To call Dan’s keynote speech as inspiring would be an understatement. I recall leaving his presentation being gifted a calico bag because I tweeted the #wewillgather whilst he discussed the riot clean up project initiated via a Twitter hashtag to bring people together to clean up the London streets in 2012 . Dan said it was about “place shaking, not place making” and this really resonated with me.

Making posters for the empty theatre drew attention, in a subtle way, to the cultural importance of the building and gave people a chance to reinterpret the history and future. It was so much fun to put art up in a place that was blank before, whilst also drawing attention to the building’s significance.

This week are excited to be launching the Swansea, Wales, UK version of this project and we will be calling for artists to imagine up their own theatre show for the currently empty Palace Theatre on High Street – see it on Google Maps here. 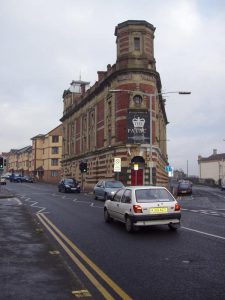 Over the coming months we will be sharing history, images and anything we can find to help inspire you to create your very own theatre poster. Our friends at Volcano Theatre in the UK will be pasting them up for the Troublemakers Festival from 13-16 July.