Many of those in Newcastle would know there has been a huge community response to the painting over of the Guido Van Helten mural this week. This has raised a number of questions from a range of people, such as, what rights do the community have in privately owned spaces that face and impact the public domain and what exactly is the nature of street art; temporary or permanent?

2010 – Umpel (mural) and Ben Foster (stencils) on back of The Former View Factory (Now The Grain Store).

As a person whom has worked in the arts community in Newcastle for a number of years, focusing on murals and street art style works, when I worked as This Is Not Art Festival Director in 2010 I identified an opportunity to engage businesses (and venues) working with the festival to create a public art walk. This project was funded by Copyright Agency Limited and provided the opportunity to hire a curator, Carli Hyland. Carli and myself worked on doing a call-out and we had a great response. Carli worked with artists from a range of locations. The project saw many artists including Ears, Damien Mitchell, Umpel, Ben Foster and Trevor Dickinson who have all continued to increase their portfolios since this project. 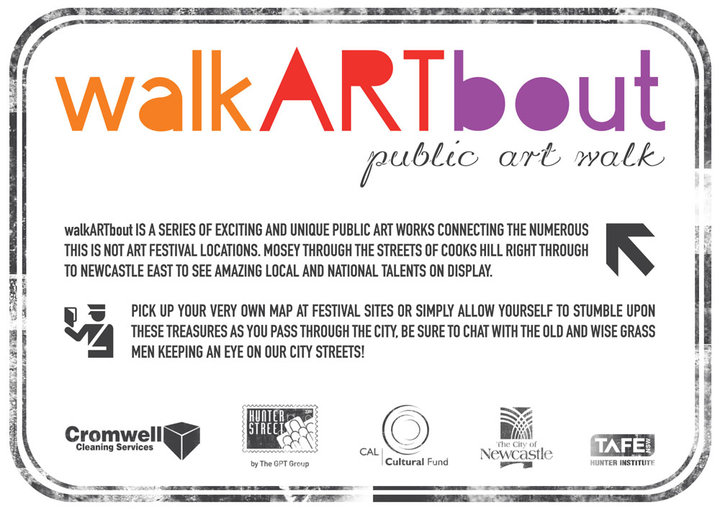 Notably, this public art project was actually Newcastle’s Trevor Dickinson’s first ‘street art’ work which was a series of letterbox illustrations as temporary paste ups, after this I was contacted by Council’s then Graffiti Team Leader, Saul Standerwick, who saw a vision for Trevor’s iconic work on the then boarded up Lucky Country Hotel after seeing the pasteups as part of walkARTbout. The Renew Newcastle shop Little Papercup did a blog about it here.

The graffiti team management team and the placemaking department have been vigrously contributing to the beautification of place with murals. Really, I had to pitch to owners with graffiti problems for them to consider paying for art. After all, they were already paying for repairs. Luckily, the art did slow done the tags.

Trevor’s murals have since become iconic in Newcastle with securing a number of commissions in Civic near the Newcastle Museum, Newcastle Beach tunnel, Mayfield pool and the Merewether Tunnel. It is my belief that the open-call out process by Octapod and TiNA Curator allowed for artists of all background to apply and this is one of many reasons that cultural projects require some kind of governance and ongoing management.

When I was working on walkARTbout with Carli, one of the challenges was convincing owners that the street art works would not start a graffiti war on their wall. Owners were reluctant because the perception is that ‘graffiti’ sends a bad message. Yet, one thing people didn’t know is that the community love seeing the art and this kudos can bring all kinds of positive benefits to a place. 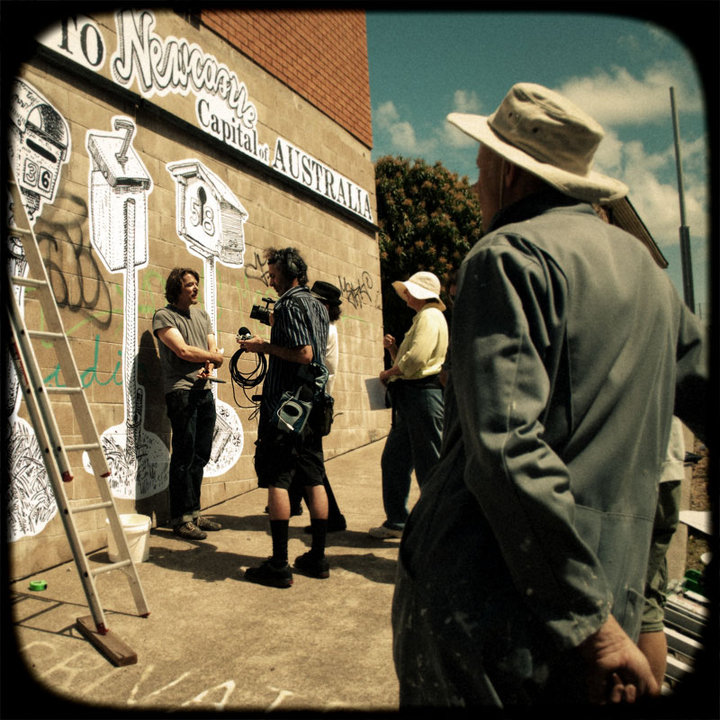 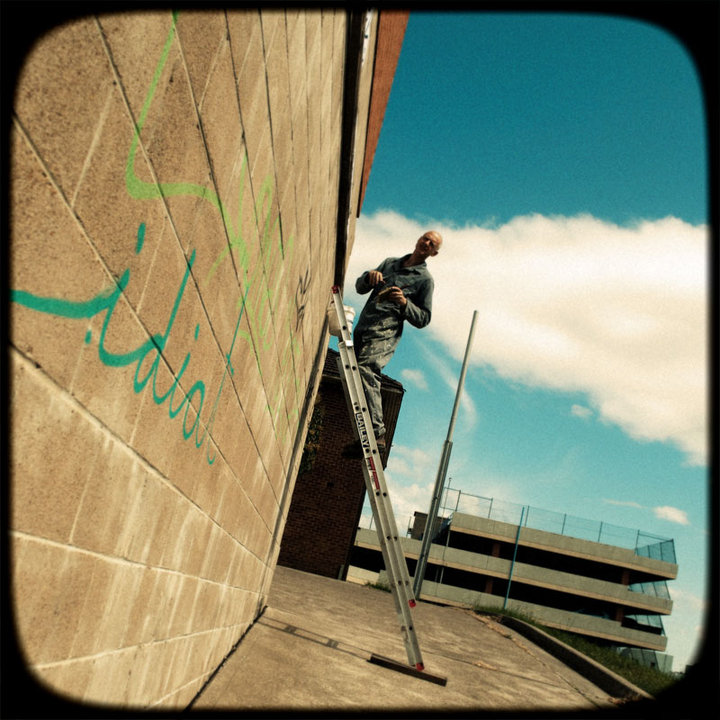 As the founder of Street Art Walking (SAW) in 2011, I saw a chance to link artists with businesses, mainly because all those businesses and property owners I had spent time convincing that the art would be positive, were now keen for more art. 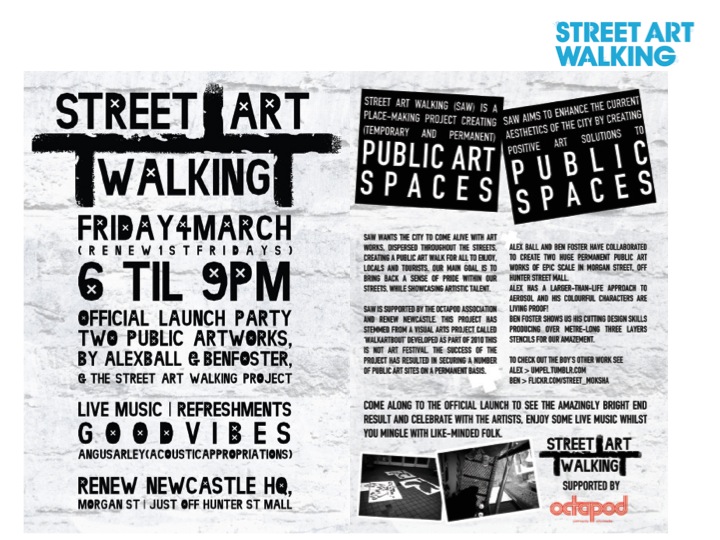 I was lucky enough to have the support of the New Enterprise Incentive Scheme (NEIS) helping me set up a business that would seek walls and commission art for proactive businesses, local government and community groups. It was vital for me to try and create a map of these works, a marker on them so that people could find the artist and the story of the art. This has always been important, the artist recognition and telling the story so that projects are not exclusive and that art is accessible to as many as possible. 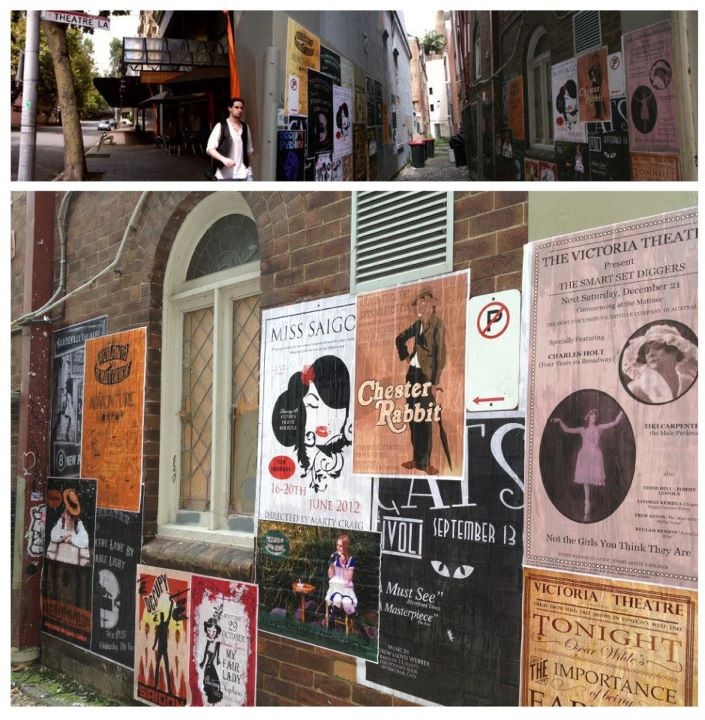 An example of a project which was actually conceived by Newcastle Council’s Graffiti Team Leader, at the time, Saul Standerwick is the The Theatre Lane Project in 2012. Without the vision of Saul to allow a temporary, pasteup artwork, which was funded completely by Council this project would not have happened with the vigour and consistency that it did. I was able to do a call-out, which drew artist submissions all over the world, and continually change the posters over a three month period. This project is proof that governance does not have to taint fun street art projects. I even got in a real life graffiti feud doing this project! Shout out to KAYE ONE!

Some artists out there might say, but street art is for fun. Of course, go and make it! No one forces artists to work within governed or managed art programs. Yet, the benefit of having inclusive programs that are funded are immense. I have seen artists come forward to SAW that have never made large scale murals and they leave with huge smiles at the new opportunity that a call out has provided. 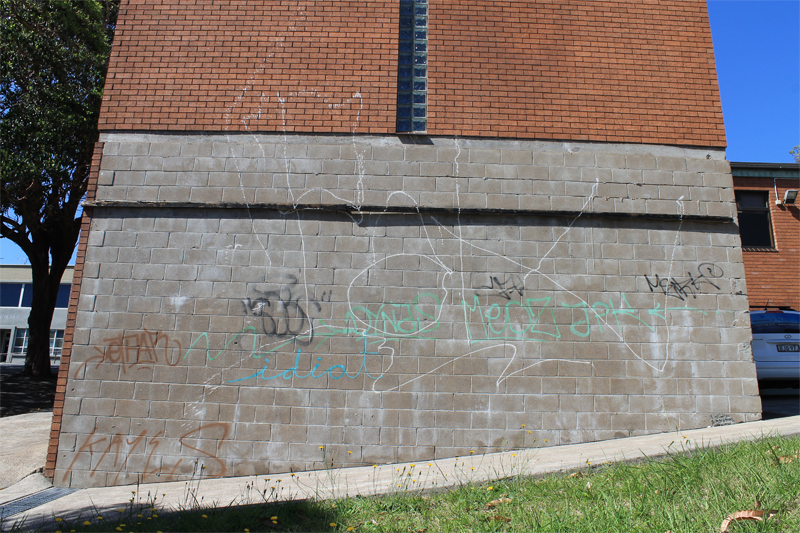 Before 2011 SAW mural by Umpel for Lost at E Minor 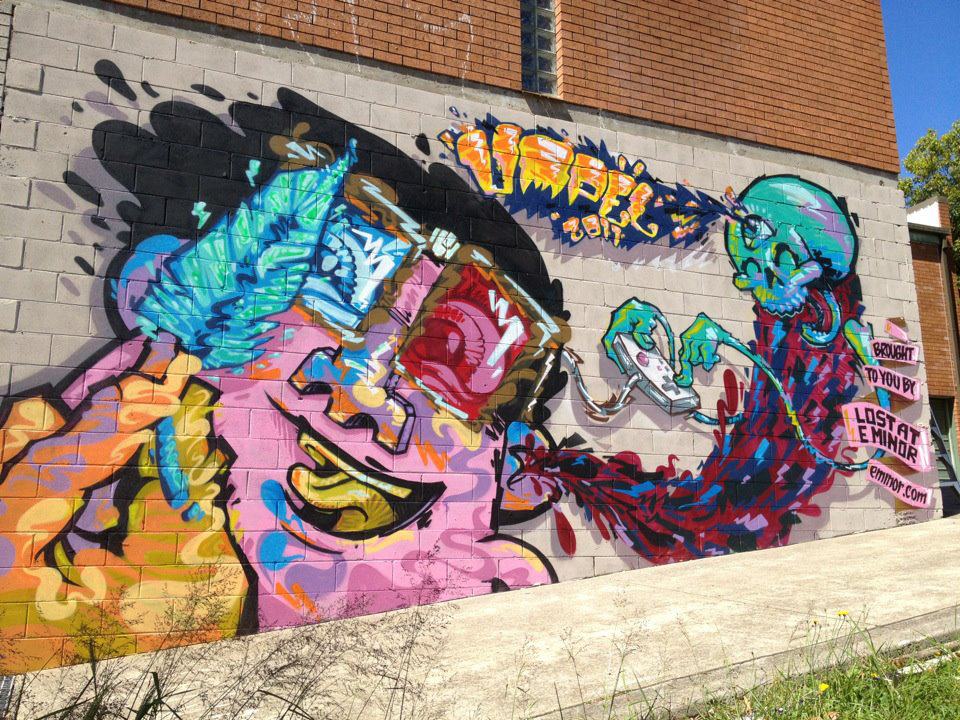 SAW projects often asked artists to quote their fee, not offering a set sum of money, rather giving artists a chance to truly value and cost their work – on their terms. Sometimes, owners couldn’t afford works and they would say ‘I will just get my mate to paint it’. My response to this was always ‘Great. Just so you know, artists need to be paid for their work’ It is a passion of mine that artists can, at least, cover their costs and that businesses do not exploit the artists desire to create by offering them a ‘free wall’. I believe artists’ rights are important and is one reason why it was a mission to get artists decent fees for their work. I would be lying if I said we never did freebies. We did. We spent our own time and money on a number of works. Because, yes we love it! 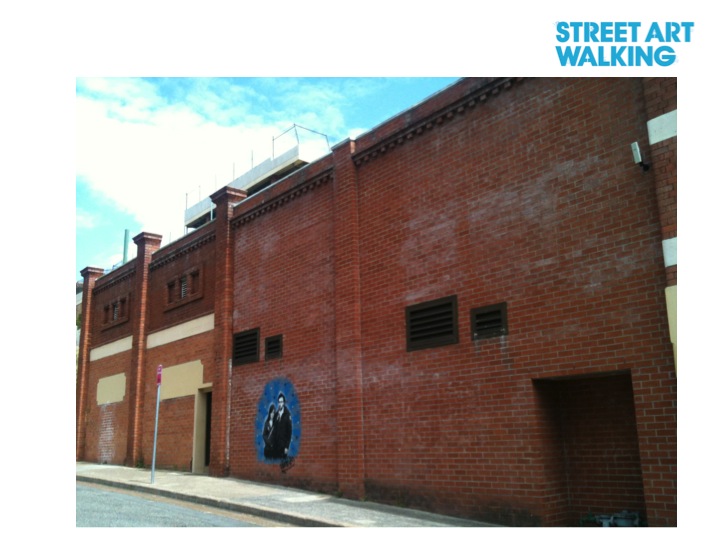 Stencil by Damien Mitchell for wakARTbout 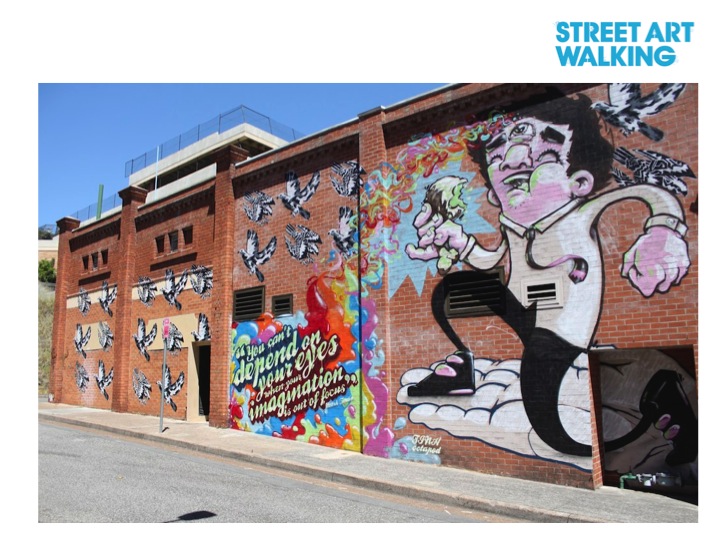 The flipside of being an independent and doing call outs is that it is so much work! For years I have been fielding questions about how can I get walls for artists, how much does art cost for owners, how much should artists quote for projects and so on. It’s complex and each to their own with quoting their time. National Association for Visuals Arts (NAVA) have some guides and I use these when working with, or representing, artists.

When you are a sole trader working in a unique domain of being an art consultant it can be overwhelming to manage the interest that comes in various forms of communication. From other arts workers sending you project details to promote, artists asking for help on grants, getting information from artists for grants, keeping an up-to-date register of all the artists expression of interest which comes via facebook messages, instagram, twitter, website and email. There are so many artists that wanting to make art, especially in Newcastle.

Have you heard the statistic that Newcastle has more artists per capita than anywhere else in NSW? I don’t even know if it is true anymore but that little fact was well touted when I was at The University of Newcastle in 2004 until 2009. This is why it bewilders me so that the arts and cultural department of council is lacking the resources to support the creative community.

Today, I am lucky enough to get requests for walking tours to find some of the amazing projects out there and I make a point of including all kind of projects from publicly funded ones like the murals near the museum and beach to the illegal graffiti and community gardens. 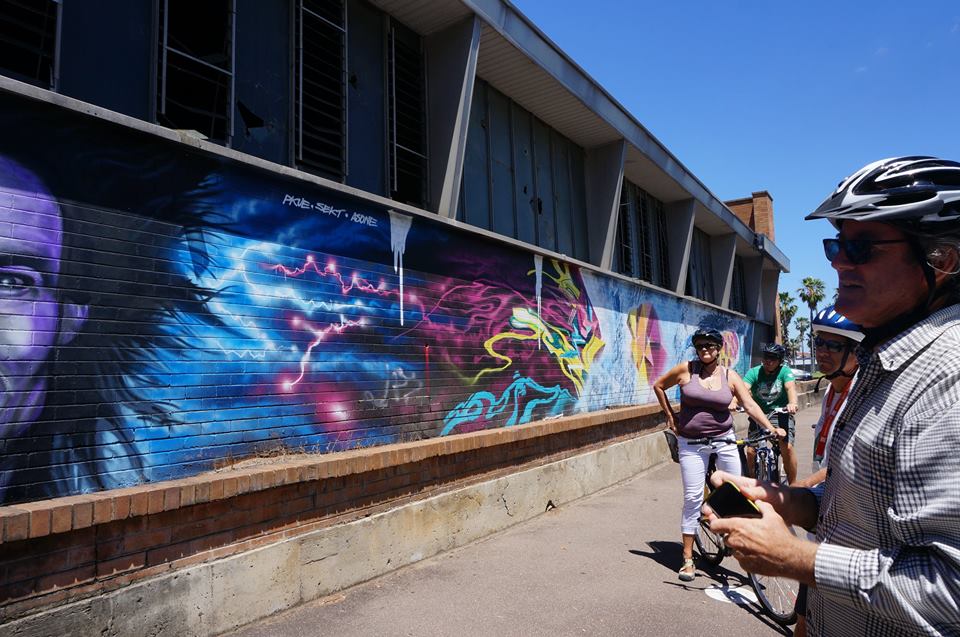 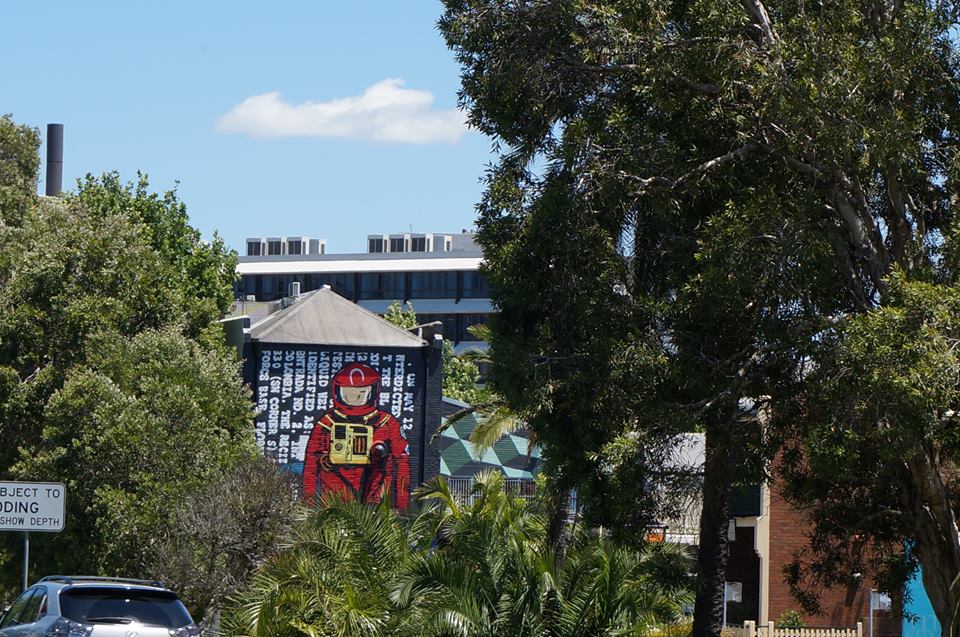 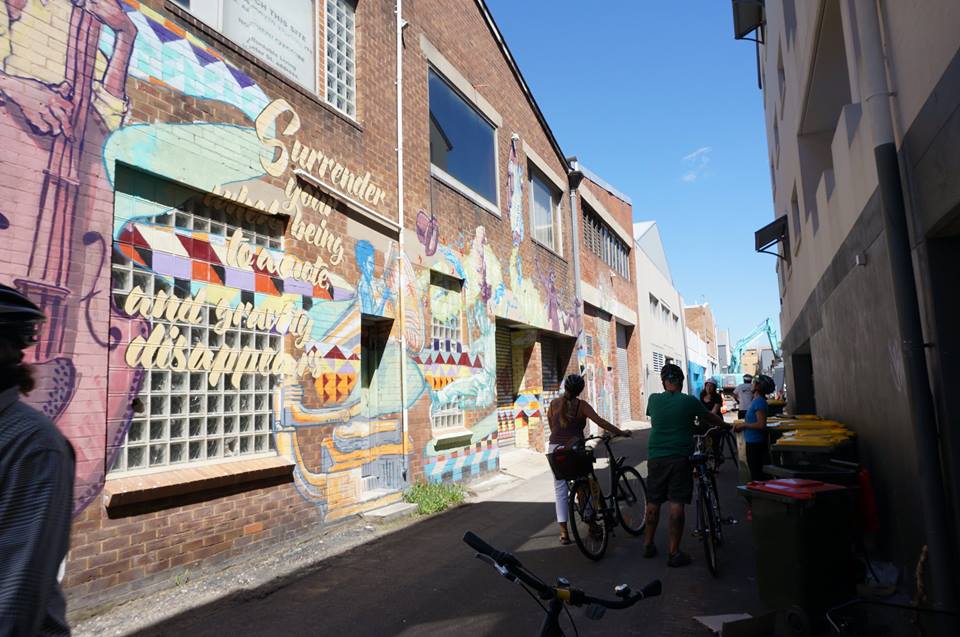 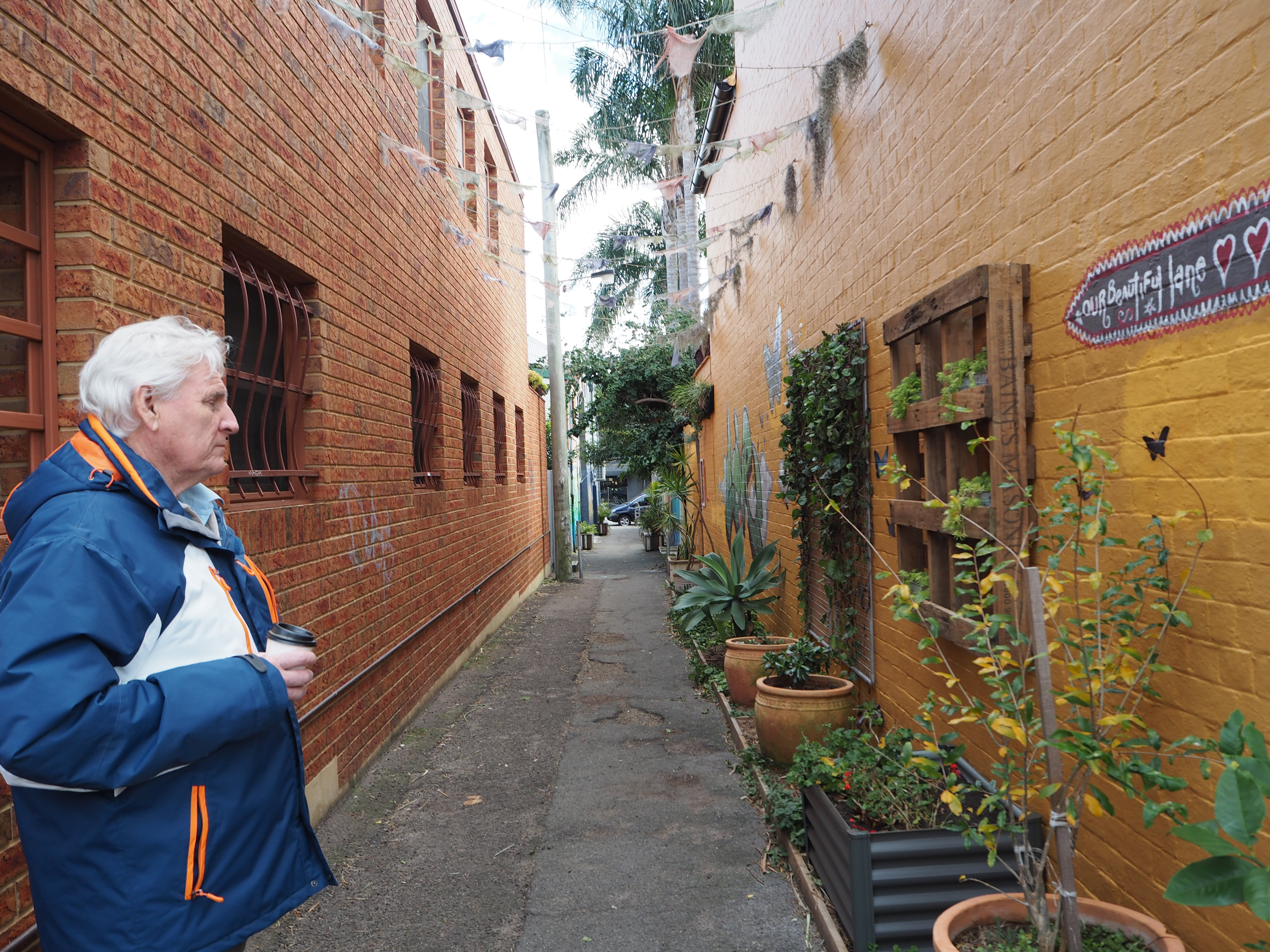 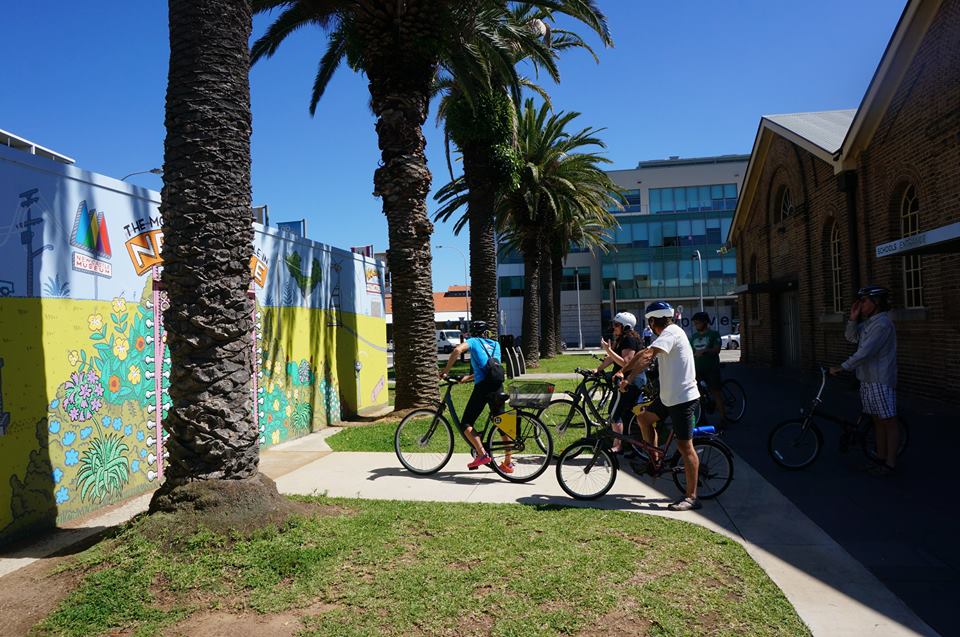 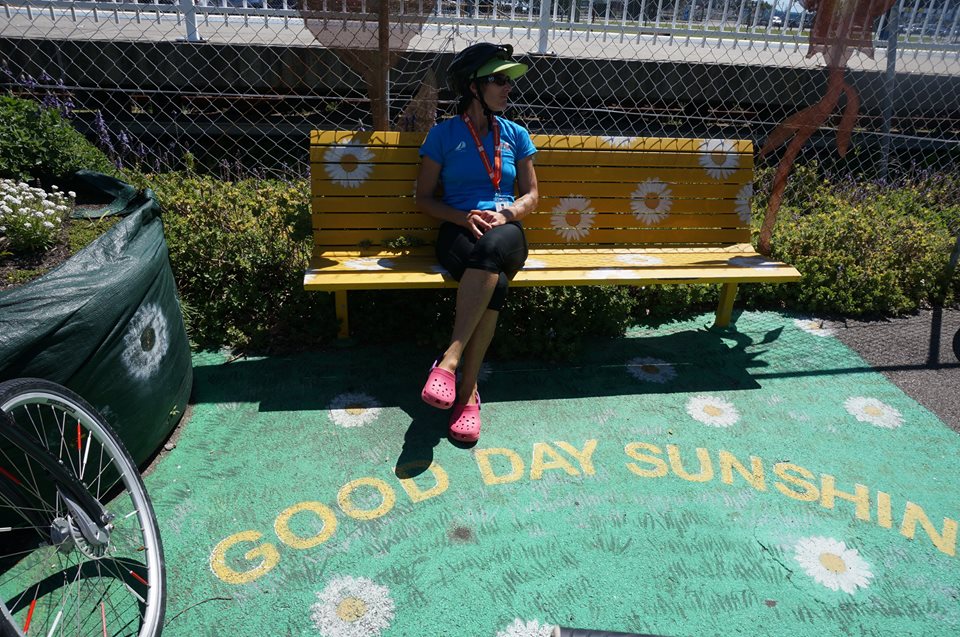 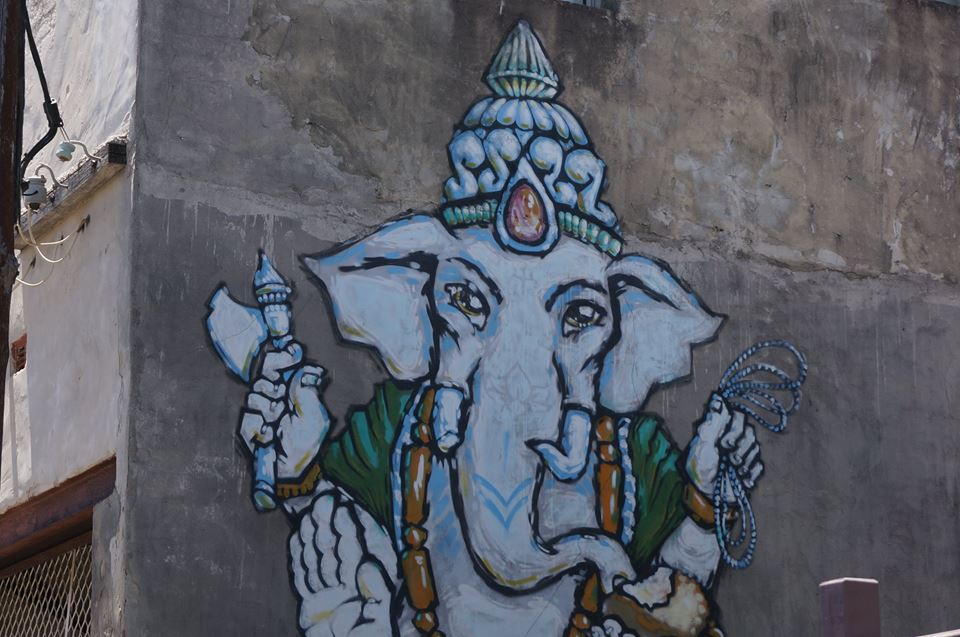 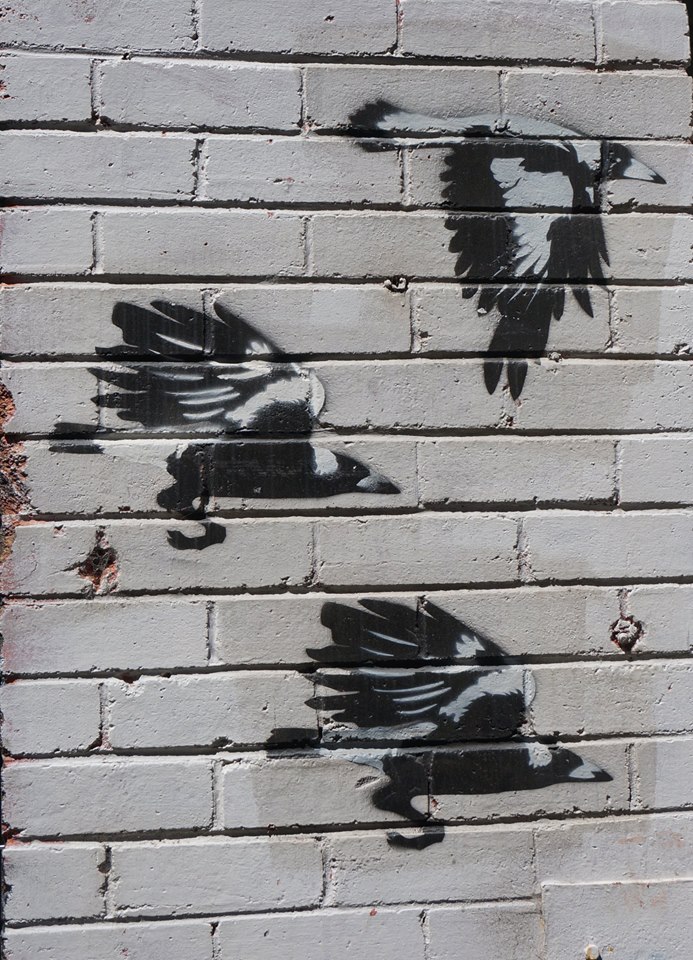 Yesterday I received an email from one of my Newcastle street art tours who stated;

“This destruction of Guido van HELTEN’s mural on the corner at Stewart Avenue shows two things.

(a) The Phillistines are many; and (b) judging by the outrage – the project has succeeded in raising awareness of street art to the level where it is part of the identity of Newcastle – for many of us.”

Now, if a guest from one of my tours can see that street art has become part of the Newcastle story, when will it become part of the cultural action plan beyond being a beautification box ticker and be recognised as the value art form that it is. Remember, Guido Van Helten is currently a finalist for The Sulman Prize for The Brim Silo Project. I feel it is time for these street art works to be recognised in the arts and cultural domain.

Whilst there have been numerous set backs for the creative community, from a council perspective with a defunct public art program, two roles lost (public art officer and gallery director) and the revitalization of the gallery halted the cultural identity has been growing, DIY style, with organisations like Renew Newcastle, This Is Not Art festival and events hosted by Idea Bombing Newcastle.

An exciting street art and pubic art movement has been growing from strength to strength with projects like Hit The Bricks and graffiti events which have been concieved by independent businesses. Artists are ready to take the initiative and it is due time that artists locally were given the opportunity to be involved in the ‘revitalisation’ of the city. 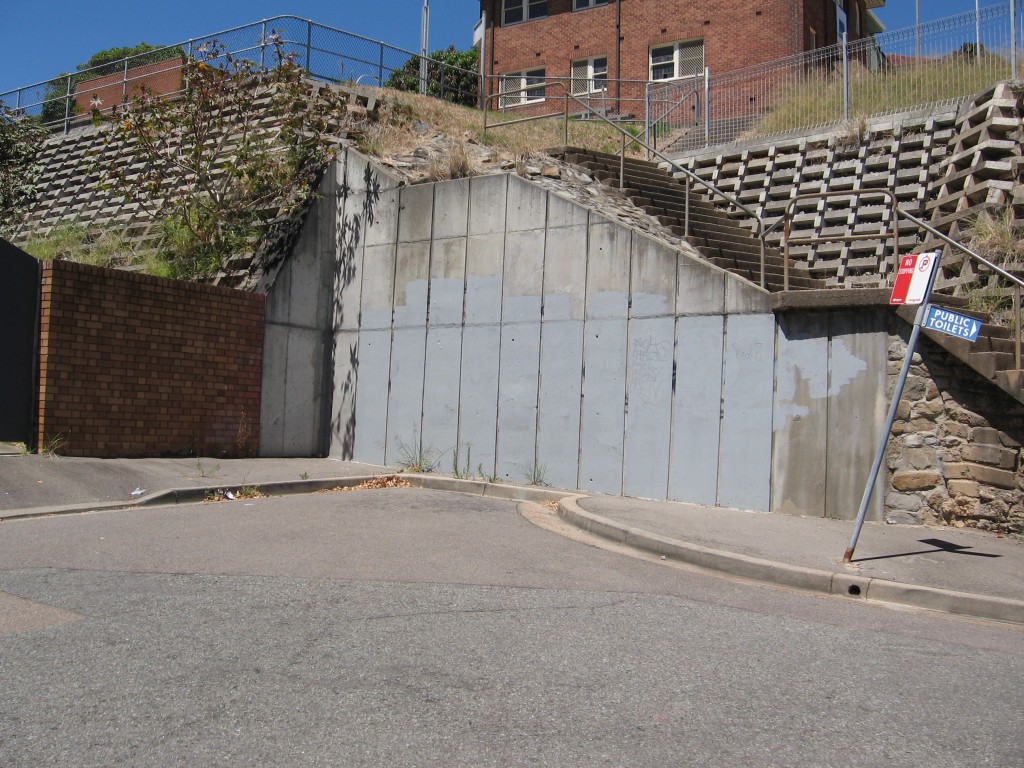 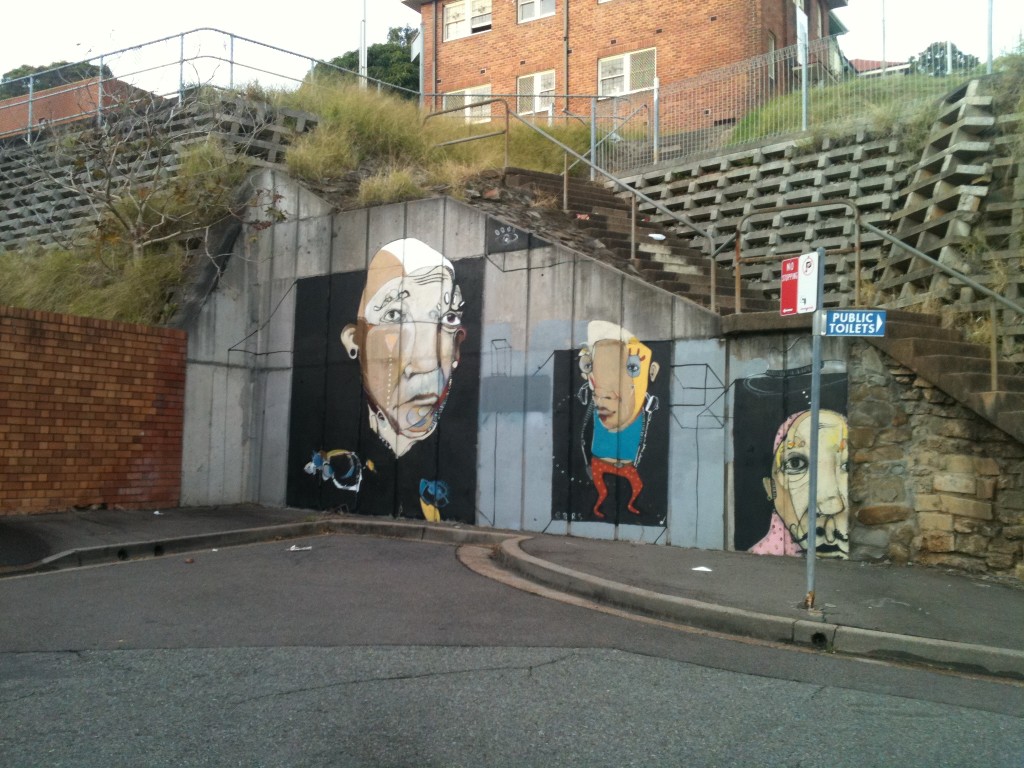 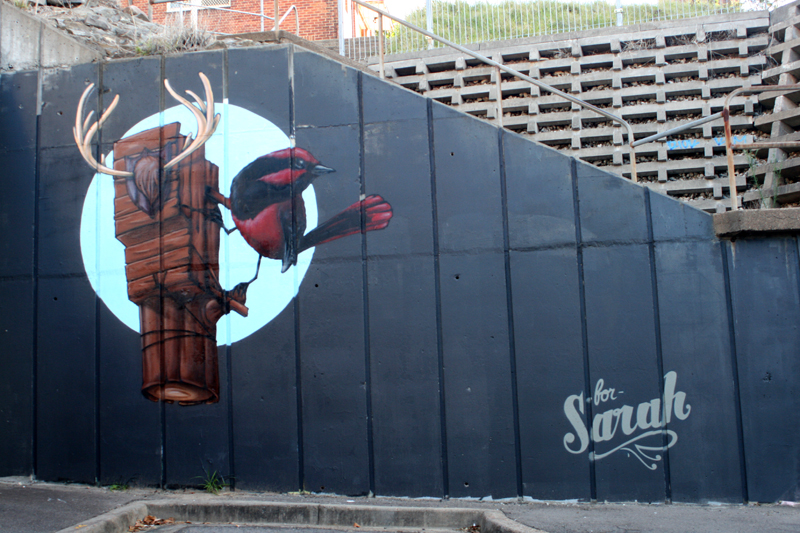 In terms of responding to Newcastle Mirage’s question of ‘Is Street Art Temporary or Fixed?’. Of course, the very nature of street art is ephemeral, often political stencils, pasteups and protest imagery are all part of street art. Are these legally commissioned works ‘street art’, when considering ephemeral work? Perhaps not. They are akin to a big outdoor gallery, a series of gifts bestowed upon our city, made possible by the tenacity of creative people whom live and invest their art, passion and time there. The pace of change is slow and I am hoping this is an opportune time to create a dialogue around how to better support more art changing, as clearly the community values these works as proven by the response to losing a work in a prominent location.

‘Does the community have a right to complain?’ My answer, passion from community is not complaining. This is one of the best opportunities for community engagement around the cultural identity of The City of Newcastle, yet most people want to argue about who is ‘right’ or ‘wrong’.

Is there a duty of care that needs to be taken when curating private commissions in the public domain? Yes. As a curator of murals in public spaces, thought and sensitivity are taken into consideration, balanced with a cultural understanding of the area and the artist selected for the wall. Owners of buildings are reassured the subject matters of the works will be respectful and sometimes there are even vetting processes through committees like strata boards. Does this happen in ‘street art’ in Hosier Lane? Not exactly.

If there is one thing I have learned from this week is that the culture of street art is still growing in Newcastle. For a truly evolving scene of ephemeral artworks, artists have to be brave enough to be vandals or councils have to have rigorous cultural policies and visionary staff that include street art – not just community murals.

I haven’t even had a chance to mention the importance of graffiti to this conversation and how graffiti is not the enemy of street art. All of the projects; graffiti festivals, the artworks and pieces, connect to contribute to a culture that has been growing (albeit slowly) since before I was born in 1983.

In the meantime, here is a map collated with the support Paul Bevan of ABC1233 whom did a call out for people to pin artworks back in November 2013.